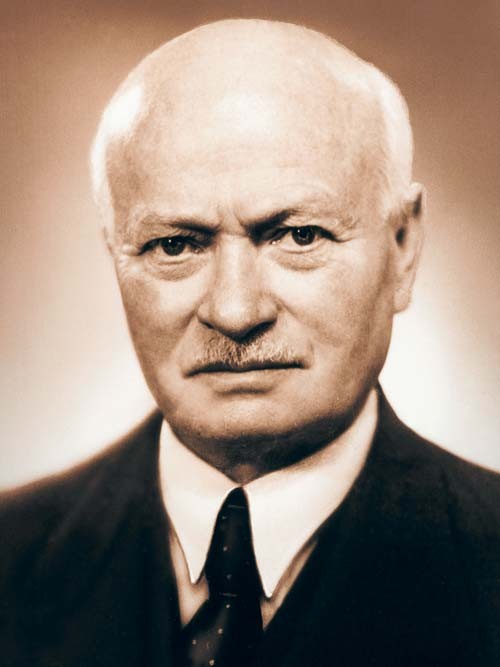 Press release_07/09/2015_Adolf Messer
In memory of Senator Dr. Adolf Messer, who would have turned 100 on April 6, 1978, the Messer family established the Adolf Messer Foundation in 1978. The foundation supports the research and teaching of scientists who have drawn attention to themselves through outstanding achievements.

Dr. phil. nat. Nadine Schrodt, researcher at the Institute of Earth Sciences at the Goethe University, received the Adolf Messer Prize worth 25,000 euros on the 2 July 2015. The award was in acknowledgement of her German Research Foundation project: "Which C/N ratio leads to the polymerisation of small molecules in the system C-H-N-O at very high pressures and temperatures". The Adolf Messer Prize is one of the most valuable science prizes given by the Goethe University in Frankfurt and is awarded annually for outstanding achievements in the fields of the natural sciences, engineering sciences, as well as economics, social sciences and the humanities. Prof. Wilhelm Bender, Chairman of the Association of Friends and Supporters of the Goethe University, and University Vice President Prof. Dr. Enrico Schleiff presented the prize during the Academic Awards Ceremony of the Friends and Supporters.

Adolf Messer founded the company Messer in Höchst am Main in 1898. At that time, the company was involved in the manufacture of acetylene generators. Lectures in Darmstadt had drawn Adolf Messer’s attention to acetylene lighting. As a student, he developed safety systems for acetylene generators, for which he obtained his first patents in 1902 and 1903. Now in its third generation of family ownership under Stefan Messer, the Messer Group is the world's largest family-owned industrial gases company.