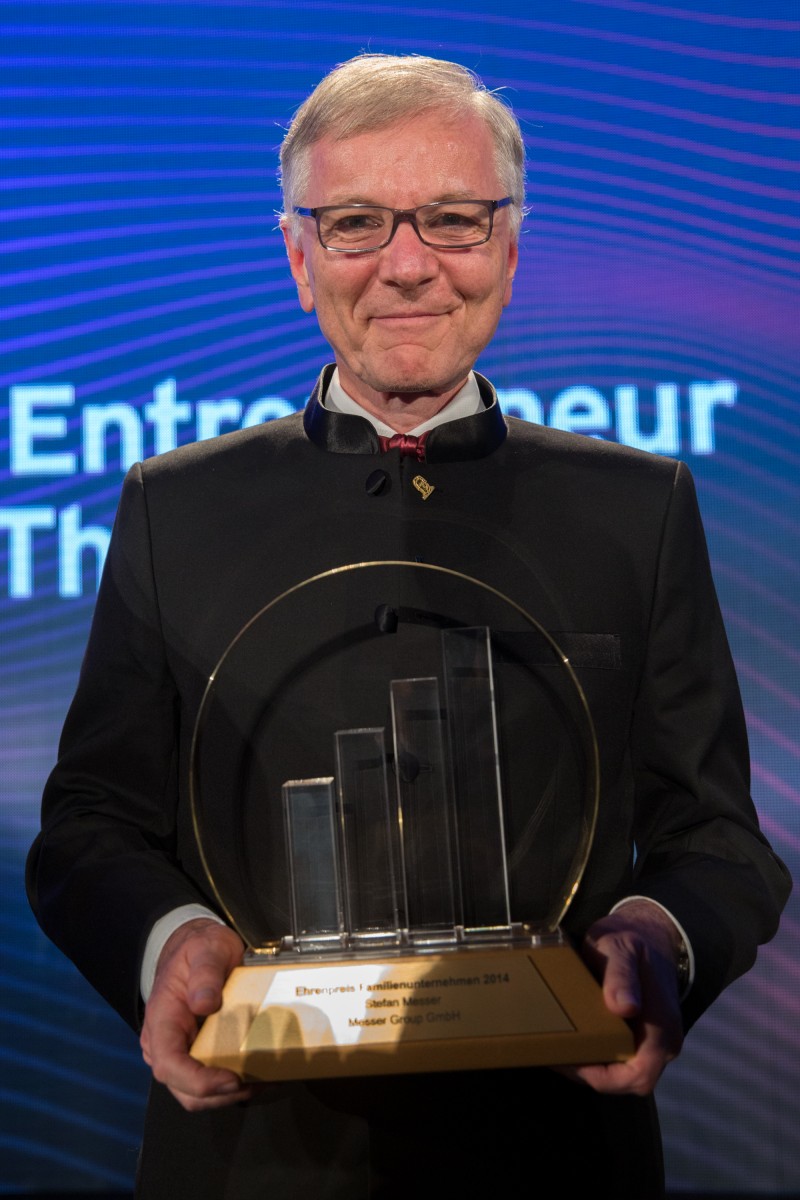 Stefan Messer received the “Prize for family-run companies” from the international consultancy and accountancy firm Ernst & Young in Berlin on 7 November. The prize was awarded as part of the “Entrepreneur of the Year” competition, which each year acknowledges entrepreneurial excellence in different categories.

“The entrepreneur saved the company his family founded in 1898 from imminent insolvency and repositioned the provider of industrial gases for international business. The jury was assured by the future potential - the international footprint with a broad product portfolio - as well as entrepreneurial achievement such as the taking back of the shares into family ownership. In addition, the practising of social entrepreneurship as an statement of responsible, sustainable behaviour,” reasoned the laudator, Peter Englisch from Ernst & Young, the decision of the independent jury. Stefan Messer received his award at a celebratory ceremony attended by well-known guests from politics and business, as well as his family.

First and foremost, his struggle to keep Messer going is acknowledged. In the publication regarding the award, it says: “In 2001, Goldman Sachs and Allianz Capital Partners take over the shares of the highly indebted company from Hoechst. Messer restructures the company with their help – and buys the shares held by the financial investors three years later for almost 1.4 billion euros: “Withdrawal would certainly have been the simplest solution, but I didn’t want to do that,” said Messer. “I believed too strongly in the company and the employees; I just had to find a way forward, I had to bear that.” In 2004 he is the boss of his company and starts afresh in the home market in 2007 – and contracted with cancer. He also overcomes this pain.

Ten years after the beginning of its independence, the Messer Group has rediscovered its former strength and achieves a consolidated sales in 2013 of more than one billion euros in industrial gases and a further 500 million euros from the welding and cutting technology division: “Sometimes,” says the entrepreneur, “you just have to implement something with determination.”

Stefan Messer’s responsibility for today’s company is also acknowledged. “When you speak to your employees, you perceive more than when you just rely on reports,” Stefan Messer is quoted as saying. Furthermore: “Through numerous honorary posts in associations and universities, the entrepreneur helps to shape politics and economic research today. Exchange between Europe and Asia became a personal concern for him. Messer is involved in the German Asia-Pacific Business Association (OAV) and is a member of the board of trustees of the China Institute at the Goethe University Frankfurt. He is president of the international industrial gases association, IOMA, vice-president of the chamber of commerce and industry in Frankfurt and honorary consul of the Republic of Slovenia.”

The “Entrepreneur of the Year” has been awarded globally in more than 60 countries. 2014 marks the 18th time that it has been awarded in Germany. The competition organised by EY is supported by well-known companies and media.