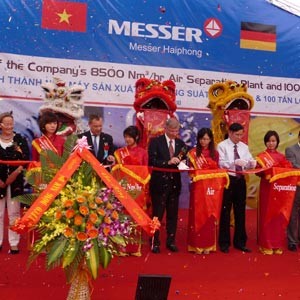 The industrial gases specialist Messer officially opened its first production unit for industrial gases in Vietnam on October 6, 2010. The facility is today the largest air separation plant in Vietnam with a capacity of 300 tons per day of oxygen and 510 tons per day of nitrogen. The plant supplies all the gas requirements of Hoa Phat Steel Joint Stock Company’s new integrated steelworks complex in Kinh Mon Town, Hai Duong Province. Messer has invested 20 million US dollars in the production facility, and also wants to supply manufacturers across numerous industries in the north of Vietnam with the gases that are produced here.

Messer Haiphong, soon to be a wholly owned subsidiary of the Messer Group, was incorporated in 1997. In October 2007, Messer Haiphong signed a contract with Hoa Phat Steel Joint Stock Company to supply the steelworks with oxygen, nitrogen and argon – the industrial gases needed for steel-making – via a pipeline.