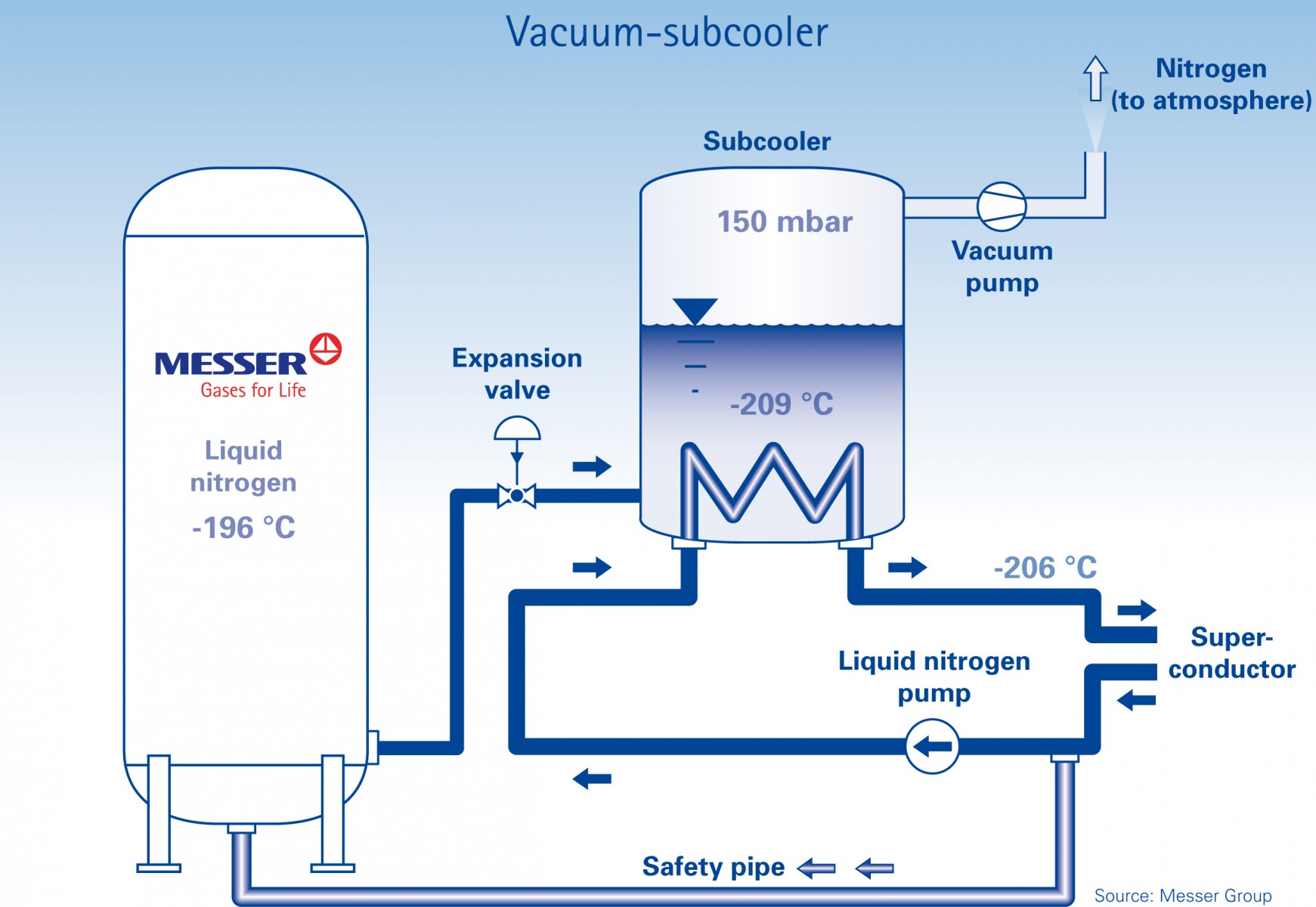 Press release_04/14/2015_Schematic diagram of a vacuum-subcooler
Industrial gases specialist Messer has developed a new cryogenic technology for the “AmpaCity” project of the energy supplier RWE.

The future will be about economical and efficient use of energy and resources. New technologies will be needed, for example, to enhance the electricity grid and thereby improve distribution of electricity to Germany’s cities. In particular, it will be necessary to operate such systems effectively. Industrial gases specialist Messer has developed a new cryogenic technology for the “AmpaCity” project of the energy supplier RWE. This makes it possible to use liquid nitrogen to cool superconducting cables down to minus 209 degrees. Hitherto it has been possible to cool them to only minus 196 degrees. That allows electricity to be transported through the grid almost lossless. “AmpaCity” has now qualified as one of the projects for KlimaExpo.NRW, an initiative from local government in North-Rhine Westphalia and Germany’s Federal Ministry for Economic Affairs and Energy.

As part of the pilot project, the longest superconducting cable yet commissioned went into action in Essen in April 2014. In long term, superconducting cables should considerably reduce energy losses from electrical transmission lines. This is because superconducting cables can transport five times the amount of electricity through cables of the same cross-section and do so at a relatively low voltage. In addition, there will be savings on both cost and space for operators and communities.

Not without nitrogen
The energy loss occurring in present-day electrical transmission lines is based on electrical resistance to the transport of current. Some materials can lose their resistance entirely at very low temperatures and become superconductors. The (metallic) superconductors discovered circa a century ago have to be cooled down to minus 269 degrees Celsius. This, however, requires costly helium refrigeration and high energy consumption to run the cryogenic system.

In 1986 Nobel Prize winner Georg Bednorz discovered high-temperature superconductors, which can be cooled with liquid nitrogen rather than helium. The transmission line used in the AmpaCity project is made of this material. Messer has developed a new refrigeration technology for this purpose with a cooling temperature of minus 209 degrees Celsius. Normally, it is not possible to cool anything to lower than minus 196 degrees using liquid nitrogen. However, Messer’s new cryogenic technology vaporises nitrogen at below atmospheric pressure, which allows a temperature of minus 209 degrees Celsius to be attained, thus achieving the specification for the cables. It is not possible to reduce the temperature any further since nitrogen freezes at minus 210 degrees Celsius. At minus 209 degrees the refrigerated nitrogen compensates the heat absorbed by the AmpaCity superconductor cable from the surroundings and makes it possible to transport electricity with almost no losses. A reflux system allows an energy-efficient closed circuit.

Interview with Dr. Friedhelm Herzog, Messer’s specialist for gases applications in the industry

How did the cooperation between Messer and RWE materialise?
At the Hanover trade fair in 2012 I got into a conversation with Nexans, the supplier of the superconducting cable. We talked about the AmpaCity pilot project and the requirements for cooling a kilometre-long electricity cable. After this conversation, we at Messer developed an idea for a new liquid-nitrogen refrigeration technology, which offered various benefits over the originally envisaged cooling system using Stirling engines. We then presented this concept to RWE and met with their agreement.

Wherefore is Messer nitrogen used in the AmpaCity pilot project?
The liquid nitrogen has to achieve two things: it is pumped in liquid form through the superconducting cable in order to conduct away any heat which penetrates through the heat insulation from the outside. This works in a similar manner to a central heating system, although it makes things cold instead of warm. The nitrogen itself “heats up” from minus 206 degrees Celsius when it enters the cable to minus 201 degrees Celsius at the exit.

What were the challenges and how did you master them?
Normally, liquid nitrogen vaporises at minus196 degrees Celsius, but the subcooler requires a vaporisation temperature of minus 209 degrees. That means we had to persuade nitrogen to cool down during vaporisation by more than usual. To do this, we reduced the vaporisation pressure with the help of vacuum pumps till the extremely low temperature required was attained. We actually would have wanted a temperature even lower then this but that is not possible, as nitrogen freezes at minus 210 degrees Celsius to solid nitrogen “ice”. Having solid nitrogen in the subcooler is obviously a problem technically. In order to keep the vaporisation temperature stable at minus 209 degrees Celsius and inhibit fluctuations causing the nitrogen to drop below its freezing point, we developed a special temperature regulation system which reliably prevents any freezing of the nitrogen.

Apart from the procedural challenges, the requirements for the apparatus also had to be fulfilled. Primary amongst these was the safety of the construction and its reliability in operation. In order to ensure safety of the plant, we use the liquid nitrogen supply tank for venting purposes as well, so that liquid nitrogen can be flushed from the cable in the event of the cable suffering damage without it escaping uncontrolled into the environment. A patent application has been made for the routing system, which is employed for this purpose. Reliability of operation is ensured by redundancy of all pumps and critical fittings. If any component should fail, the appropriate aggregation replacement is cut in automatically. Thanks to this doubling of equipment, it is also possible to carry out maintenance while the system is in operation, meaning that the refrigeration system is ready for use at all times.

What is special about this project for you personally?
It is a technological world premiere, which is drawing immense interest from the media, from politicians and from experts in the field. It is not unusual for two or more groups of visitors from all over the world to come every week for a guided tour.

Personally I would like to highlight the especially good and trustfully cooperation with our project partners RWE, Nexans and Krytem. Our work together has always been constructive in every situation.

How could this nitrogen technology be used in other areas, too?
Other applications for high-temperature superconductivity can be found wherever very high electric currents are flowing, in electrolysis plants, for example. Maybe an air separation plant will one day be connected to the grid by a superconducting cable, even if that is undoubtedly not the most typical application.