Messer: “This was not planned.”
Newsroom
Archive 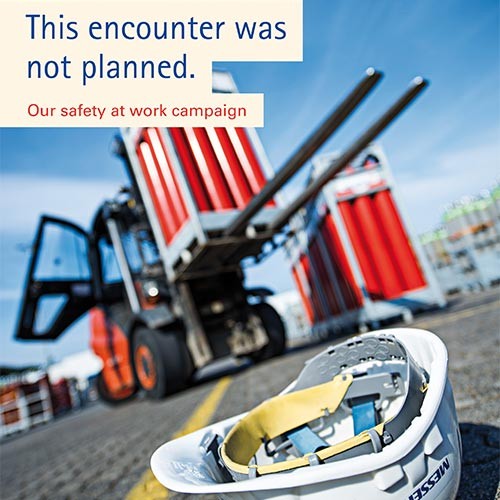 Messer: “This was not planned.”

Messer, the world’s largest owner-managed industrial gases specialist, with headquarters in Bad Soden near Frankfurt, has launched a year of safety at work with a company-wide day of action on Friday, the 13th of September.

“This was not planned” is the motto of the campaign, which is aimed primarily at improving safety by raising awareness of hazardous situations in the workplace and when travelling to and from work. “Early recognition of critical situations that can lead to accidents has to become standard practice in the everyday work situations that people are accustomed to,” says owner and CEO Stefan Messer.

Unplanned break on Friday morning
The campaign motto, “This was not planned”, is designed to draw attention to the fact that it is not only business plans that are thwarted by accidents. The year of safety at work was therefore launched, appropriately, by setting off a practice alarm without notifying the staff. At 11 o’clock local time, all 120 Messer locations in Europe, Asia and Peru were evacuated. Over 5,000 employees had their work interrupted unexpectedly and were given their annual safety training. “An enforced break, which can severely disrupt the day’s routine, particularly in the case of scheduled business with our customers,” says Hans-Gerd Wienands, Messer CFO. “With this spontaneous interruption, we have demonstrated that accidents do not only result in operational downtimes but can also have an adverse impact on, and even destroy, the plans that families make for their lives.”

Not afraid to show its own brand
Alongside individual measures such as safety inspections, tailor-made training programmes and risk analyses, as well as safety audits carried out among the locations, there is also a poster campaign in over 30 languages. The poster images, which were photographed in various areas of operation such as gas filling plants, cylinder storage locations or offices, depict accident situations that are intended to encourage identification on the part of the viewer: an activated safety shower, a safety helmet knocked to the ground or a damaged gas tanker. Messer is not afraid to display its “Messer – Gases for Life” brand on the tanks or helmets: “It’s not about image,” adds Stefan Messer. “We consider people’s sense of responsibility to be a dynamic process that is subject to continuous improvements. Your own health and that of your colleagues definitely serves as an incentive in this regard – it is one of our most precious assets and irreplaceable.”