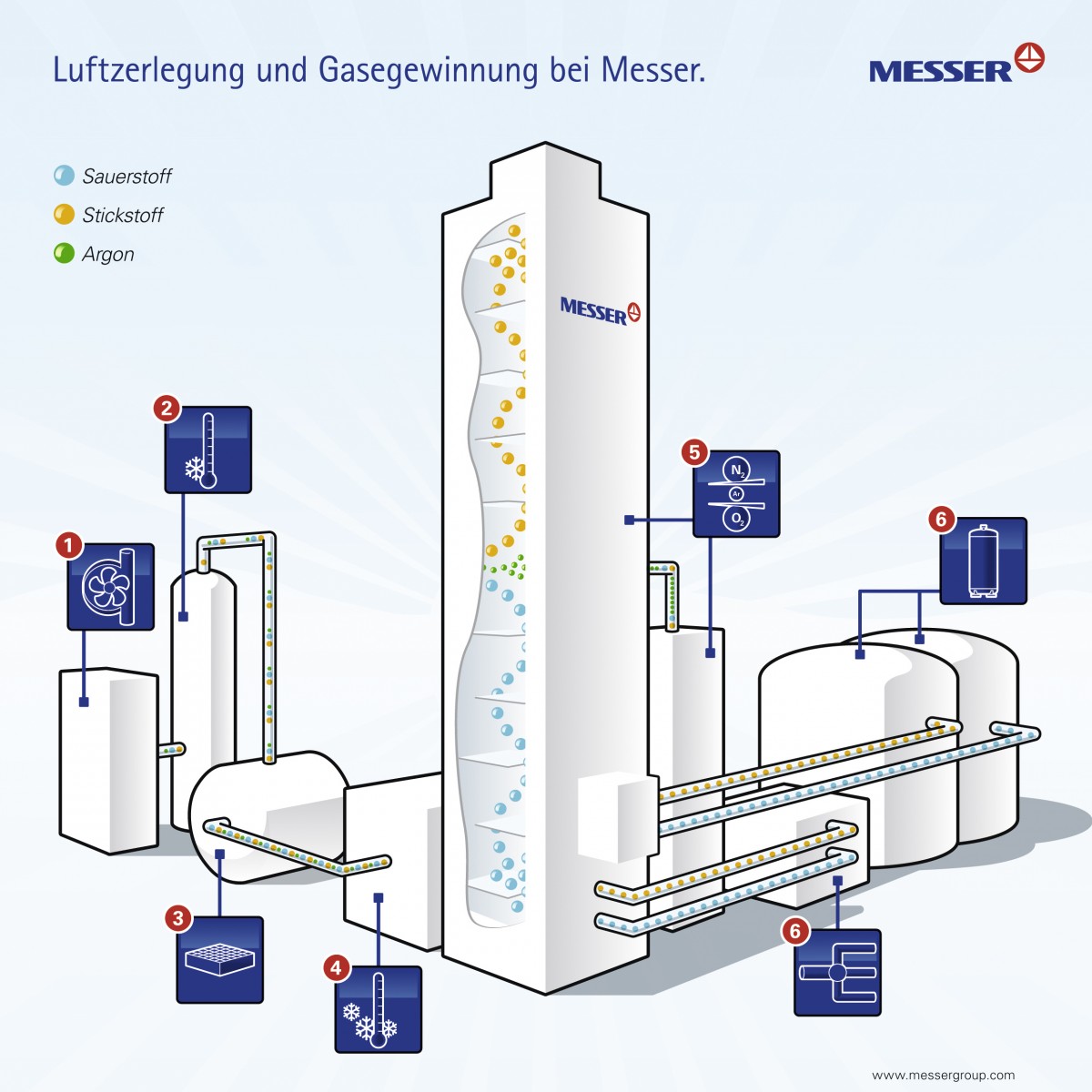 Messer: New launch in Germany according to plan – worldwide investments

The first new production plant of the industrial gases specialist Messer is starting operation according to plan. From 1 October, Messer will produce oxygen, nitrogen and argon gases at the Deutsche Edelstahlwerke site in Siegen. Messer has invested around 35 million euros in the construction of the air separation plant. Under the management of its owner, Stefan Messer, the firm had only reappeared in the German market in May 2008, as a supplier of gases, under the name of Messer Group GmbH. This was after the German company Messer Griesheim had to be sold in 2004 to save the Group from being dismantled.

The air separation plant, in which air is split into its component parts, stands on an area of 10,000 square metres on the Deutsche Edelstahlwerke site, where it is operated by Messer. Along with the newly constructed distribution, filling and logistics centre for industrial gases in Siegen, Messer has created over 20 jobs in the region. Industrial gases are used in all sectors of industry, particularly in production sectors such as metal processing or food technology. High purity medical respiratory oxygen is also being produced in the new production plant. Messer is to supply two of the largest German rehab and medical engineering firms with highly purified medical oxygen for home delivery to patients with respiratory diseases. The capacity of the planned medical oxygen production line at Messer’s new filling plant in Siegen has therefore been extended.

Part of a worldwide investment strategy

Messer is currently investing around 700 million euros in atmospheric gas production plants in Europe and Asia. In this way Messer, already the largest privately run supplier of industrial gases, hopes to secure its independence and thus the future for its over 4,500 employees. Ten new air separation plants are under construction or already construced in Europe and a further nine in Asia. In spite of the financial crisis, Messer has been able to stick to its investment plans. At last, Messer has entered into a cooperation agreement with the Chinese steel manufacturer Panzhihua Iron & Steel, part of the Pangang Group, for the construction of three production facilities for industrial gases and the acquisition of existing gas generating plants in the Chinese province of Sichuan. The joint venture is investing a combined amount of over 100 million euros. Messer holds a 60 per cent stake in the company, which employs 500 people in Sichuan. The production plants supply gases for the steelworks belonging to the Panzhihua Group, the largest manufacturer of steel for track construction. The cooperation agreement has a duration of 30 years. Through this agreement, Messer is confirming its long-term commitment to the Chinese industrial gases market.