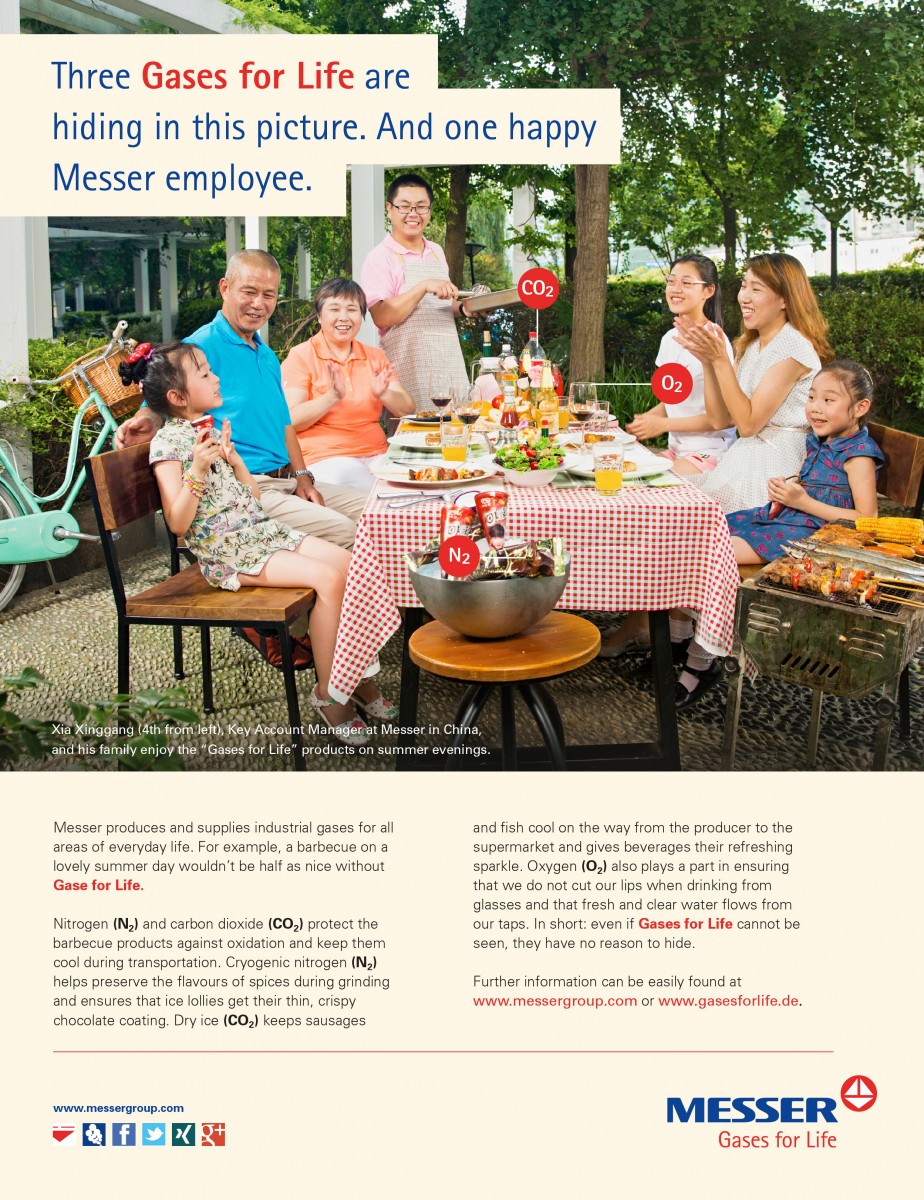 Press release_06/26/2017_Messer Group en
The “Gases for Life” campaign should raise the awareness of industrial gases – supported by advertisements such as this.

Many people are unaware of industrial gases and their uses in spite of the fact that gases are as important as water and electricity in almost all processes used in the manufacture of everyday products. Air components such as nitrogen and oxygen, but also the carbon dioxide obtained from industrial waste gas and subsequently purified by Messer, are often essential for manufacturing products in an environmentally friendly way. Messer, the world’s largest privately managed industrial gases specialist, has been drawing attention to the uses of gases for some time now. It is in large part thanks to these efforts that awareness of the Messer brand in Germany has increased by 36.3 per cent since 2012.

Oxygen, nitrogen, helium, xenon or carbon dioxide are natural products that are used in industry in a wide variety of ways by virtue of their different chemical properties. In 2012, Messer launched its “Gases for Life” campaign to raise the awareness of industrial gases. Since then, the company has been making information on gases available to the public, supported by popular scientific articles on social media. Messer also provides information to schools, for example on the air separation process.

Argon is introduced into the space between the panes of double- or triple-glazed windows because the noble gas insulates much better than air thanks to its low thermal conductivity. Ozone is an economical and effective method of breaking down micropollutants, such as pharmaceutical residues, in wastewater. Nitrogen and carbon dioxide protect packaged food against oxidation and bacterial contamination, examples including powdered milk for infants as well as cheese, yoghurt and juice. Through its low temperature, nitrogen liquefies the gaseous climate killer CFC, which is released during refrigerator recycling – thus allowing collection and disposal of the CFCs. Carbon dioxide neutralises wastewater better and more economically than hydrochloric acids.

Find out more at www.gasesforlife.de