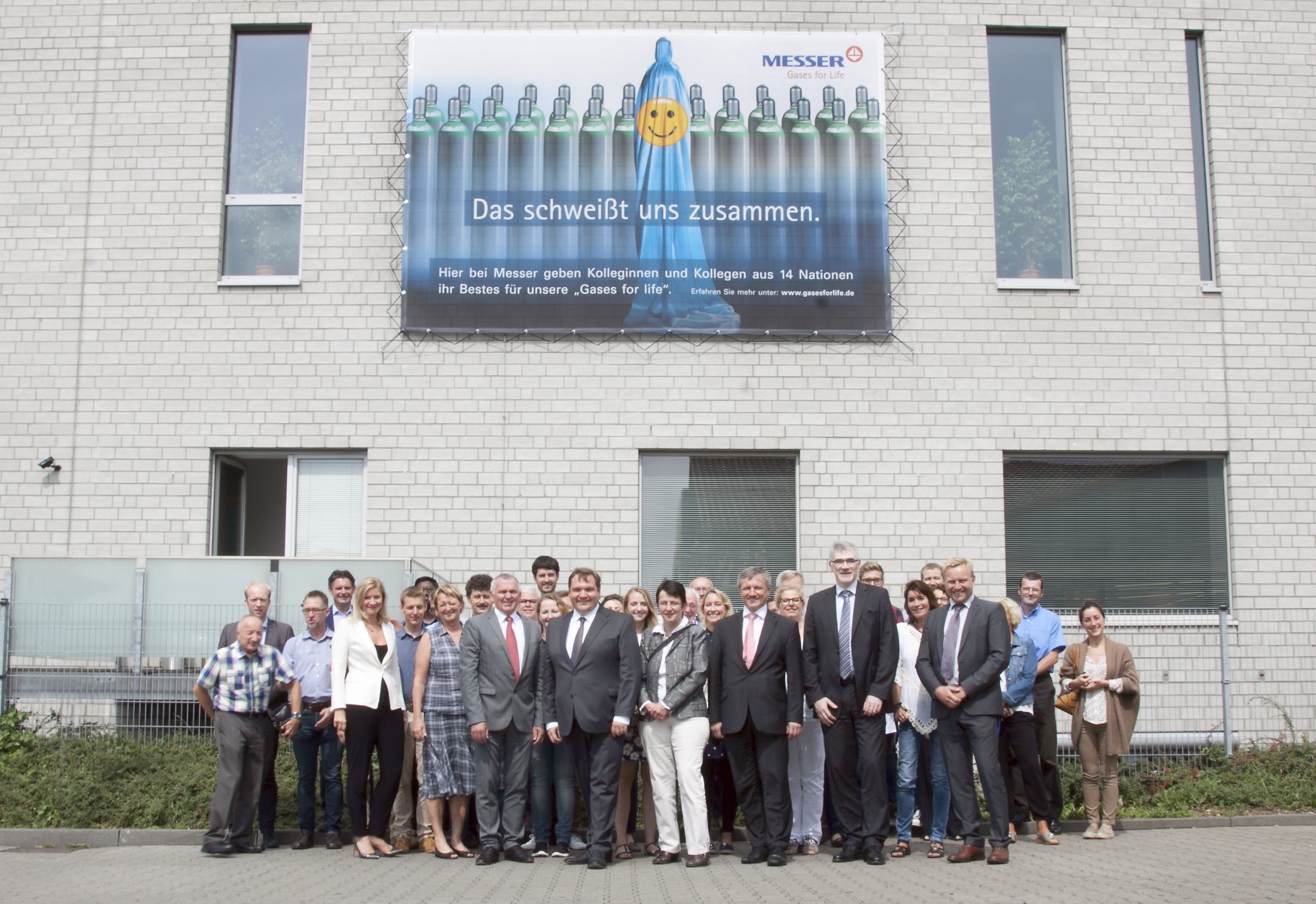 Press release_07/21/2017_Besuch Oberbuergermeister Meyer
Visit of the mayor of Krefeld (front row, second from the left): Since 2004, the world's largest privately-run industrial gas specialist has been managing the central functions of communication, logistics, engineering and production as well as application engineering with around 80 employees from the Gahlingspfad.

Krefeld’s mayor, Frank Meyer, visited the Messer premises on July 20th 2017 in company with Andreas Struwe as well as Elmar Klein-Hessling from the Krefeld business development agency and Angelika Peters, the town’s press officer. The programme of events included a brief introduction to the company and discussions about the development of the site. Since 2004, the world's largest privately run industrial gas specialist has been managing the central functions of communication, logistics, engineering and production as well as application technologies with around 80 employees from the Gahlingspfad.

For roughly an hour Johann Ringhofer and Adolf Walth, both members of Messer’s Management Board, gave the visitors a tour of the company and provided information about its products and applications, as well as its links to the Krefeld site, which go back as far as 1938. That is when Messer opened its first filling plant in Krefeld. The opening of the technical headquarters on Fütingsweg followed in 1992. Relocation of the business activities to the former velvet weaving factory on Gahlingspfad took place in 2004. The industrial gas specialists also opened a technical centre for experiments in cryogenic grinding and recycling at Willich in 2005. Another technical centre in Krefeld followed in 2007 which concentrates on developing new technologies in the areas of welding and cutting. Messer is now planning to unify all these activities at a new European research and development centre for all gas technologies in Krefeld. Concrete plans were initially put on hold in 2012 due to unfavourable business conditions, but since the start of this year, planning is back on track. The technical centre for welding and cutting has already moved to new premises on the K2 industrial estate on Kleinewefersstraße since June.

“Before the end of the year, space should be available here for all areas of application in the development of the technology,” said Adolf Walth. “Suitable preparatory work is also happening with great intensity.”“In addition, there will roofed areas available for warehousing and preparation of plant components,” added Johann Ringhofer.

Mayor Frank Meyer was impressed by the variety of products of the family business. On the other plans for the Krefeld site, he explained, "It is great to see the potential of good ideas in your company, and I am delighted that you are able to realise these ideas here and expand on the Krefeld site." Together with the business development, the city will support the Messer Group's efforts to the full.

In 1965 the family business merged with Frankfurt’s chemicals giant, Hoechst AG, and until 2001 it remained part of that concern under the name Messer Griesheim. After a phase of restructuring lasting three years, the grandson of the company’s founder and its present owner, Stefan Messer, managed to buy back the whole company and return it to private ownership. In order to finance this, it was necessary for Stefan Messer to sell the German business part of Messer Griesheim in 2004. During the following years, the European and Asian businesses were built up under the Messer name. Since 2008, Messer has also gone back to supplying gases in Germany for industry, research, science and medicine. These have been produced and filled in Siegen since 2009, with additional capacity provided in Salzgitter since 2010.