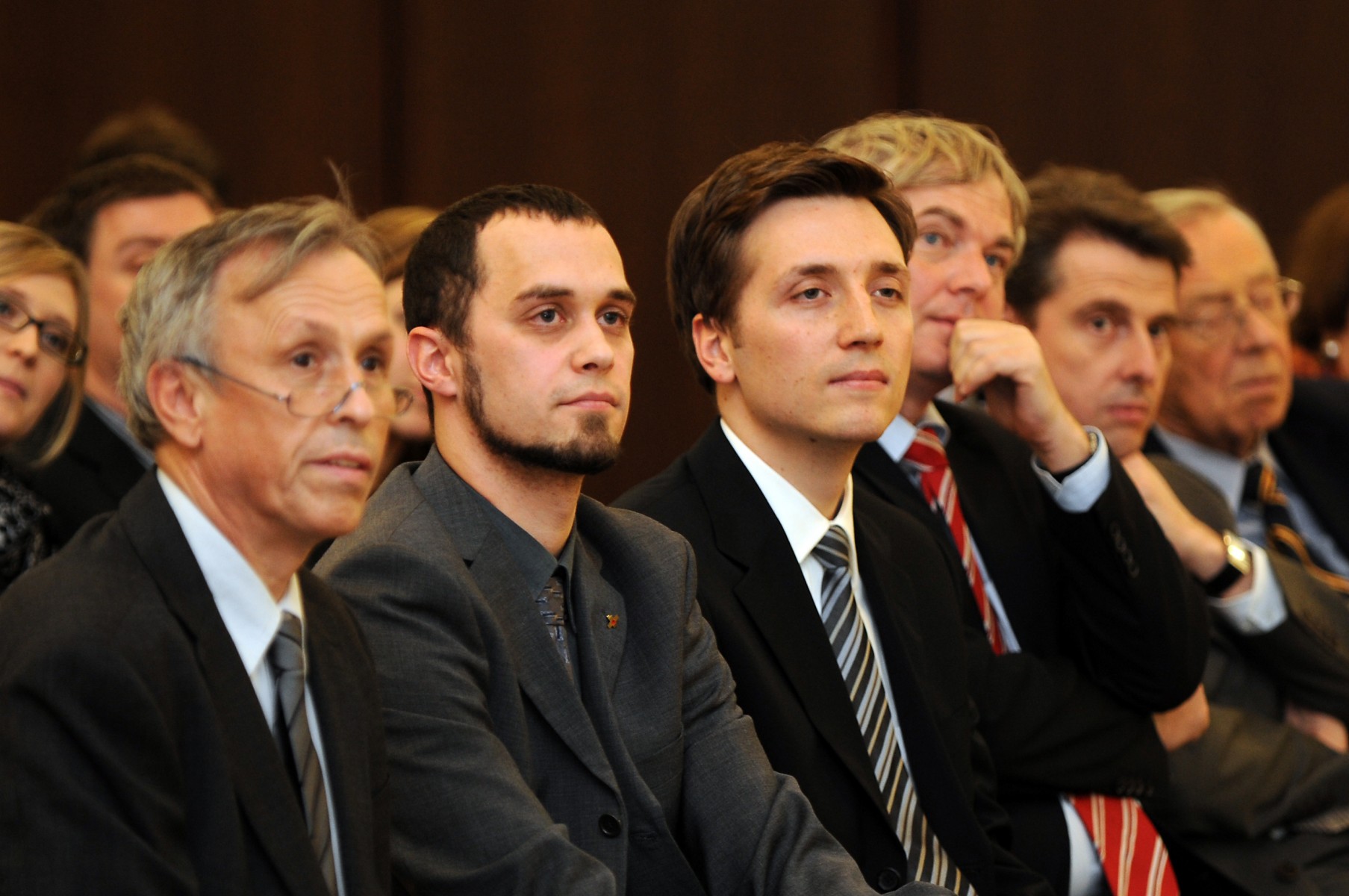 Press release_02/11/2011_Hans Messer Preis
Andreas Kopp (second from left) and Leander Paries (third from left) have been awarded the 2010 Hans Messer Prize by the Frankfurt/Main Chamber of Industry and Commerce (IHK Frankfurt).

Andreas Kopp and Leander Paries have been awarded the 2010 Hans Messer Prize by the Frankfurt/Main Chamber of Industry and Commerce (IHK Frankfurt). The award, which is worth 6,000 euros, recognises outstanding academic achievements on the part of graduates of Frankfurt/Main University of Applied Sciences (FH), taking into consideration the practical relevance of the final year project and the period of study. This is the 22nd time that this prize has been awarded for final year projects in the name of the late Dr. Hans Messer, who died in 1997, having served as President and Honorary President of IHK Frankfurt/Main for many years.

”The Hans Messer Prize is an annual reminder of Dr. Hans Messer’s outstanding efforts on behalf of the IHK organisation and industry and commerce in our region. Through this prize, IHK Frankfurt is intensifying cooperation between Frankfurt University of Applied Sciences and regional industry and commerce,” IHK President Dr. Mathias Müller said at the presentation ceremony at IHK Frankfurt/Main on Tuesday.

In his final year project, entitled “Prozessoptimierung an einer Lackieranlage” [Coating facility process optimisation], Andreas Kopp developed an image-based control system which recognises wrongly inserted PCBs and subsequently interrupts the automatic spray coating process. The process developed by him is an excellent example of cooperation between research and industry: it is already being used in production at Limtronik GmbH, the company that oversaw the project. Here it prevents possible damage due to the wrong positioning of the PCBs that are to be sprayed, and therefore lowers the manufacturing costs. Andreas Kopp’s final project was graded excellent (1.1).

Leander Paries’ Bachelor thesis, entitled “Regelungskonzept einer Umwandlung von Fremd- in Eigenkapital (DES) im Insolvenzplanverfahren" [Regulatory approach to a debt equity swap (DES) in insolvency planning] dealt with a subject at the interface of insolvency and company law. He explored the question of whether it is legally possible, within the framework of corporate restructuring, to satisfy the claims from the creditors of an insolvent company by means of a debt equity swap instead of quota payments. Leander Paries’ thesis is particularly topical, given that the legislature is now also looking at the legal questions raised by the author, and has presented a draft law on the further facilitation of corporate restructuring. The Bachelor thesis was graded excellent (1.0).

The presentation was held as part of the 14th Hans Messer Lecture. Professor Albert Speer, Managing Director of AS & P – Albert Speer & Partner GmbH – gave a lecture entitled “Frankfurt Rhine-Main, the ‘region for everyone’ in times of global crises and local resurgence", in which he talked about current and future developments in town and regional planning in the Frankfurt Rhine-Main conurbation.

The town planner and architect opened his first Frankfurt office in 1964. In 1984, Prof. Speer and his colleagues founded “AS&P – Albert Speer & Partner", which is one of Germany’s leading architectural and town planning practices, with over 100 employees working on national and international projects. For example, his practice played a major role in Qatar’s successful bid for the 2022 World Cup. In 2003, Prof. Speer was awarded the city of Frankfurt’s Goethe medal, one of the city’s highest awards. In October 2006, he received the German Federal Cross of Merit in recognition of his scientific work and the development of architecture and town planning associated with this.