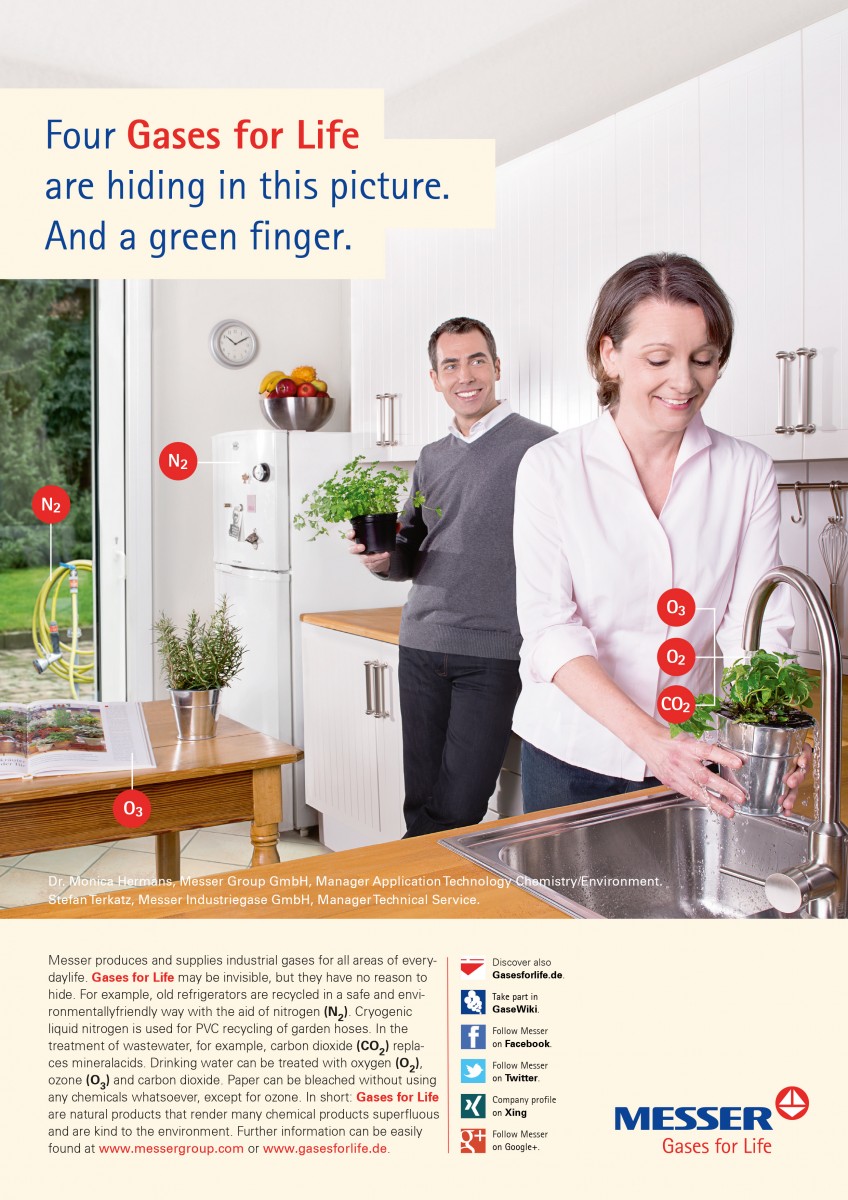 Press release_04/12/2016_Gases for Life campaign „green finger” (download, JPG)
With the 2012 developed “Gases for Life” campaign Messer wants to give industrial enterprises and the public at large an understanding of the application of gases such as oxygen, nitrogen, helium, xenon and carbon dioxide, showing them where the invisible helpers are hiding.

Most people are unaware of industrial gases and their usefulness. Yet in fact industrial gases are as important as water or electricity in nearly every manufacturing process used for producing everyday goods. Messer – the world's largest privately managed industrial gases specialist – would like to make the public more aware of these benefits and, in particular, where they improve the environmental-friendliness of manufacturing operations. Messer emphasises that the gases extracted from the air, like oxygen, nitrogen, helium, xenon and carbon dioxide, are natural products and their different chemical properties make them suitable for use in versatile industrial processes. Messer launched its "Gases for Life" campaign in 2012 and since then has been preparing information about gases for the general public and flanks them with popular science articles in social media. Messer has also been providing educational material for schools, such as on the separation of air. This widening of the company's message into the public space has contributed to increase Messer's awareness level in Germany by 44.7 per cent since 2012 as well as the general public's knowledge of all the gases listed in the survey - oxygen, nitrogen, carbon dioxide and the noble gases.

Messer regularly analyses its brand’s reputation scores and media feedback. The results of the latest reputation survey in Germany show that the family company's brand awareness score was 12.6 per cent at the end of 2015. The survey was carried out by an independent institute. Messer's brand awareness in Germany was 10.7 per cent in the previous year. Messer managed to significantly increase its awareness rating in the Duisburg and Oberhausen regions by around 260 and 362 per cent respectively. But also in its local markets Bad Soden, Krefeld and Siegen. The number of those polled who were able to name Messer as a manufacturer of industrial gases or who answered "yes" to the question of whether they were aware of Messer as a manufacturer increased, too.