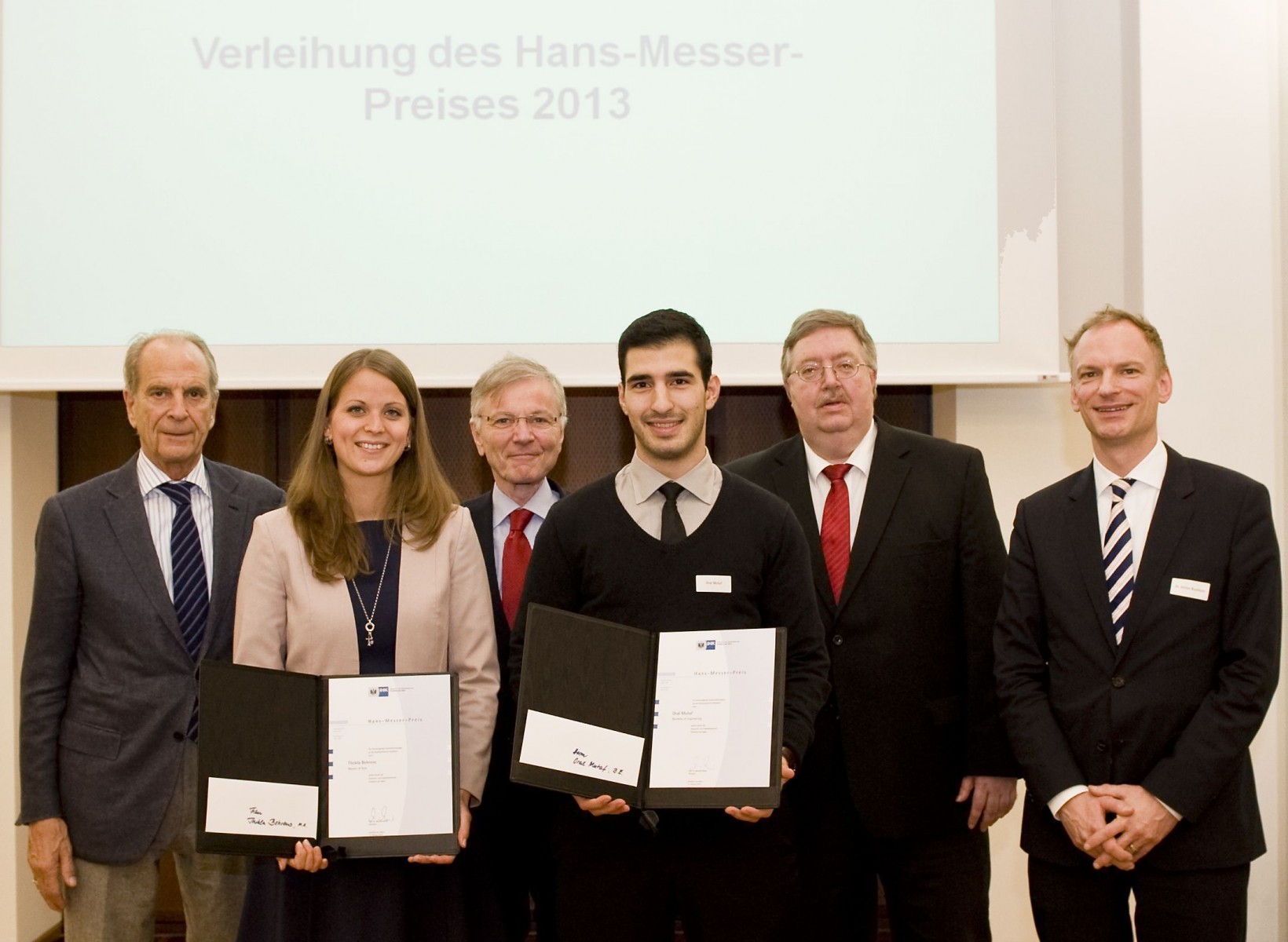 On 11 February, the Frankfurt am Main Chamber of Commerce and Industry (CCI) awarded the Hans Messer Prize 2013 to two graduates of the Fachhochschule Frankfurt am Main (FH FFM). Both of the prize winners received the accolade in recognition of their outstanding performance in their studies and exams. The total prize money is €6,000 and is shared equally between the prize winners. The Frankfurt CCI awards this prize annually to acknowledge the practical work undertaken by outstanding university students. The accolade is awarded in honour of Dr. Hans Messer, who was President of the CCI for many years. His father, Adolf Messer, founded the industrial gases company Messer in 1898. His son, Stefan Messer, took over the company in 2004 and is today the owner and Chief Executive Officer of Messer Group GmbH.

“The promotion of young people plays a large role at Messer. For this reason, last year we launched the Academy Messer Group Junior Circle. This is an internal training concept whereby our specialists pass on their extensive knowledge to future managers,” explains Stefan Messer. “To show potential employees from the outset whether Messer is the right company for them, we are currently developing a careers website containing all the important information about Messer as an employer,” adds Dr. Hansjörg Gruber, Senior Vice President Human Resources at the Messer Group.

In her thesis, Thekla Behrens, who graduated from the master’s course Leadership in Faculty 3: Business and Law, examined new ways of recruiting employees, in particular using the internet. In collaboration with Alnatura Produktions- und Handels GmbH, Behrens analysed current changes in the job market, presented new processes for recruiting employees using the internet and social networks, and subsequently gave a presentation on the practical implementation of the new processes for recruiting employees at Alnatura. Her master’s thesis was evaluated as “very good” and Behrens completed her studies with an overall grade of 1.0.

Oral Mutaf, a graduate in Mechanical Engineering in Faculty 2: information technology and engineering, developed a software concept for his bachelor’s thesis. In collaboration with, and with the support of, Hyundai Motor Europe Technical Center GmbH he created a calculation program that can be used to simulate fuel consumption and carbon dioxide emissions of a motor vehicle. This allows the effect of measures designed to reduce fuel consumption to be simulated in advance and evaluated. Oral Mutaf was awarded the top grade of 1.0, and he completed his bachelor’s degree with an overall grade of 1.2.

The award ceremony took place during the 17th Hans-Messer Lecture. The speaker Dr. Jürgen Heraeus, chairman of the supervisory board of Messer Group GmbH, devoted his speech to the subject “Future perspectives of the industrial location Germany”.