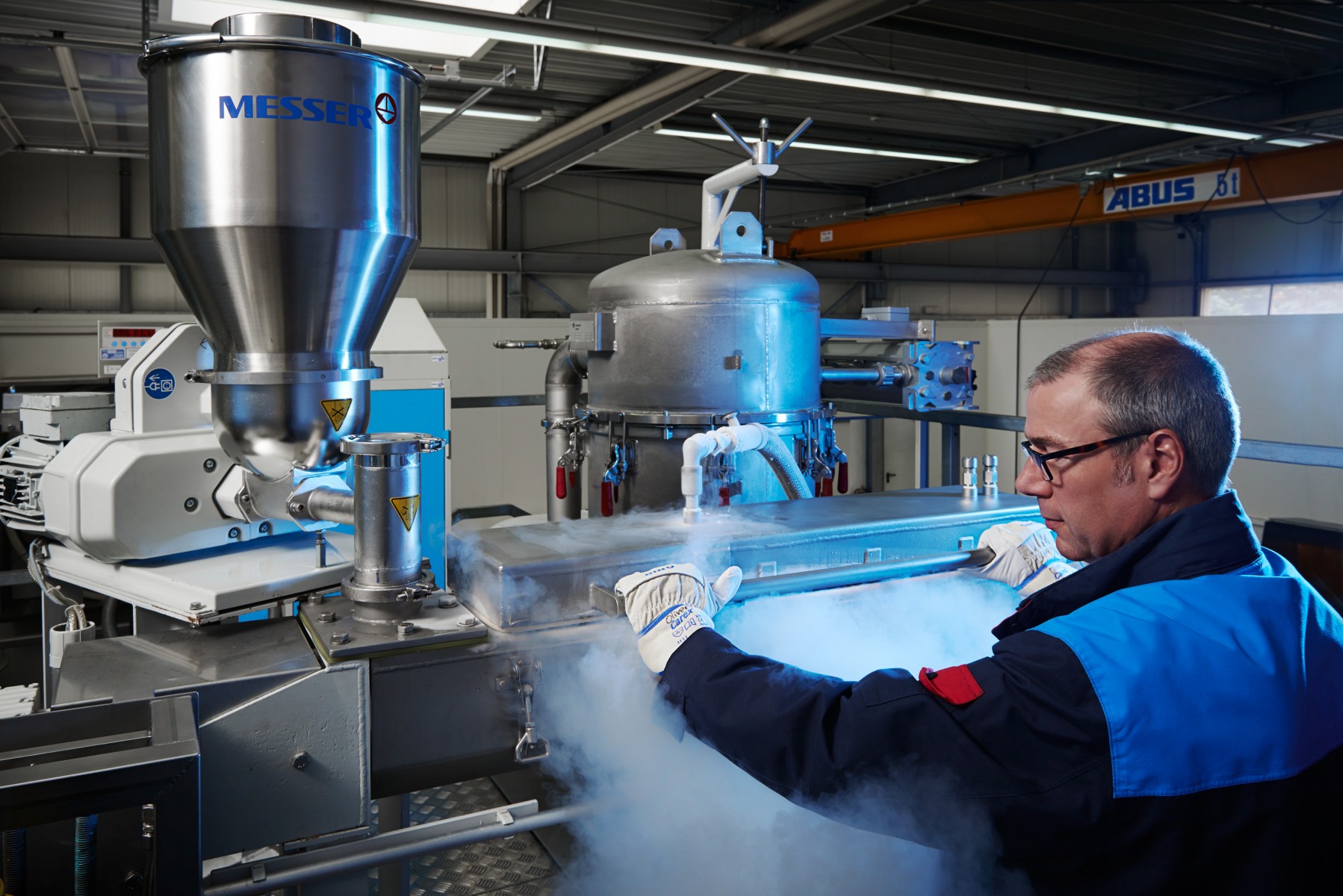 From 30 September to 2 October, Messer will be presenting its cold grinding processes in Nuremberg at Powtech 2014 in hall 4A, stand 4A-529. The largest privately managed industrial gases specialist will show the advantages of liquid nitrogen and carbon dioxide as coolants for cold grinding and will provide information about cryogenic equipment used to cool products and grinding mills.

More aroma for spices
Freshly ground spices such as nutmeg, pepper, ginger, cardamom or cloves have an incomparable fragrance. In small quantities, these spices can be easily pulverised with losing their flavour. Large-scale production is an entirely different matter, however. During the grinding process, conventional mills generate large amounts of thermal energy, which rapidly lead to the loss of the heat-sensitive essential oils along with the flavouring and aromatic substances – as with pepper, for example. Through the use of cryogenic grinding processes, those quality losses can be easily avoided, however. Liquid nitrogen or carbon dioxide compensates for the heat automatically generated during the grinding process.

Due to their high oil content, nutmegs require special mills and especially high processing standards. The product is cooled by spraying it with liquid nitrogen for the grinding process. This maintains the ground nutmegs in a free-flowing state and prevents agglutination inside the equipment during the grinding process.

Cold grinding makes PVC reusable
Recycling helps to preserve the environment and is economical, when you know how to do it. Many different materials are ground in the Messer Group’s cold grinding technical centre near Krefeld, Germany – including garden hoses, which are transformed into pure plastic powder used to manufacture new garden hoses.

One of the most widely used plastics in Europe is polyvinylchloride, or PVC for short. When plasticisers are added to this material, it can be used to make floor coverings, dashboards or seals. Burying waste PVC in landfills or burning it in incinerators is problematic for various reasons, however, and the material recycling of soft PVC material is technically challenging. This is one of the issues that the Messer Group has studied at its cold grinding technical centre near Krefeld, and it will present the benefits of using liquid nitrogen and carbon dioxide as coolants for cold grinding at Powtech.

In cold grinding, the material to be ground is cooled and embrittled with cryogenic liquid nitrogen or carbon dioxide. In addition, along with the product, the grinding process itself is also cooled. This prevents the temperature from increasing due to transfer of the electrical energy of the motors which drive the grinding equipment. Cryogenic grinding enables production with grain sizes significantly below 500 micrometers. This would hardly be possible with a conventional warm grinding process.

From the feed hopper, the material to be ground is conveyed by a metering screw into the precooler, where it is cooled by spraying it with liquid nitrogen. It is then fed into the grinding mill together with the nitrogen. The comminution process in the mill is also cooled at the same time.

In so doing, the nitrogen fulfils another function as well: as a result of the low temperatures, the different components – such as the soft PVC of the reinforcement fabric, the polyester fibres, of garden hoses – separate from one another. Once embrittled, the soft PVC is ground to a fine powder whilst the polyester fibres, due to their high tear-resistance and dimensional stability, remain unground.