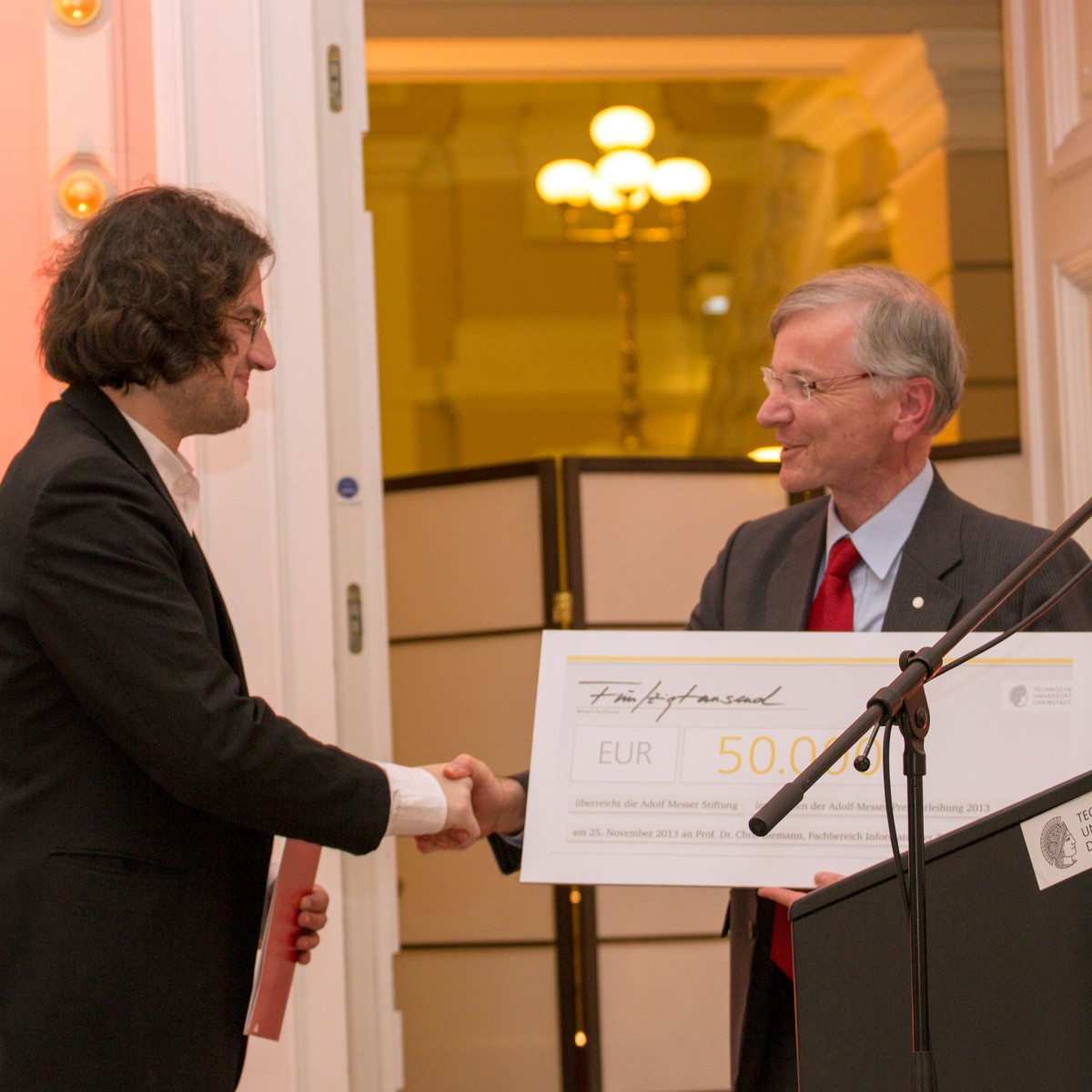 How do you teach computers to understand natural language in order to structure large volumes of text and make this information accessible? Professor Dr. Chris Biemann and his group of researchers in the Computer Sciences faculty at the TU Darmstadt have dedicated themselves to solving this problem. For his work he was rewarded with the Adolf Messer Prize, which comes with prize money of 50,000 euros on Monday 25 November 2013.

Computers have their own language which functions according to clear, logical rule and is always unambiguous. “Human speech, on the other hand, has evolved, and is not always logical and unambiguous,” explains Dr. Biemann. If a computer is to “understand”, i.e. interpret, a text written by humans, it must be taught not to see words merely as a collection of letters. A computer must also be able to recognise what concept is behind a word. Dr. Biemann explains the problem which confronts computers here using the sample sentence “She went to the bank and withdrew money”. Two different theoretical concepts could be behind the German word “Bank”: something you sit on (bench) or a financial institution.

Human beings recognise the meaning of the word “Bank” from the context. Computers have hardly been able to do this to date, and if they can, only to a limited extent. “Creating this association automatically and thus conveying knowledge from our world to computers is not a trivial matter,” says Dr. Biemann. Together with his research group, he is working on analysing large volumes of data algorithmically. Put simply: Computer programs comb through enormous volumes of data, for example daily papers printed over 20 years, and discover that some words are typically used in a similar way. Lists are thus gradually created for all words, and these contain words which are used in a similar manner. The method of having a “two-dimensional text” generated for a simple text is a development of the researchers at the TU Darmstadt.

The research approach in lets computers learn autonomously. The methods developed at the TU Darmstadt are already used in practice, namely whenever knowledge management is involved. Queries in internet search engines are an example. As the formulations and key words the searcher will use cannot be precisely foreseen, the search engine must be able to deal with the query “intelligently” and to interpret it. “Whenever a topic has not yet been developed thoroughly, a two-dimensional text helps,” says Dr. Biemann.

This year Dr. Biemann has been honoured for his work with the Adolf Messer Prize. The prize money will be invested in the research: Various related sub-projects, some of which are managed by renowned guest scientists, will also be financed, as well as a new computer whose architecture is designed to process large volumes of data and consequently promote the research.

Dr. Biemann gained a degree in Computer sciences at , where he also studied for his PhD from 2003 to 2007. In his dissertation he broke away from the traditions of computer linguistics and language technology by showing that machines can solve tasks related to computer linguistics without making recourse to knowledge provided explicitly. The machine learns “by itself”. After gaining his doctorate Dr. Biemann worked on the semantic search engine Powerset and later at Microsoft Bing in . In 2011 he accepted a junior professorship in the Computer Sciences faculty at the TU Darmstadt. He is head of the expert group on language technology. Numerous publications have been produced and a range of research projects and joint ventures established here in the last two years.

The prize of the Adolf Messer Stiftung, which is worth 50,000 euros, is awarded each year. It promotes research and the teaching of young scientists at the TU Darmstadt. Outstanding achievements in natural sciences, engineering sciences, economic and social sciences as well as the humanities are rewarded with this prize.